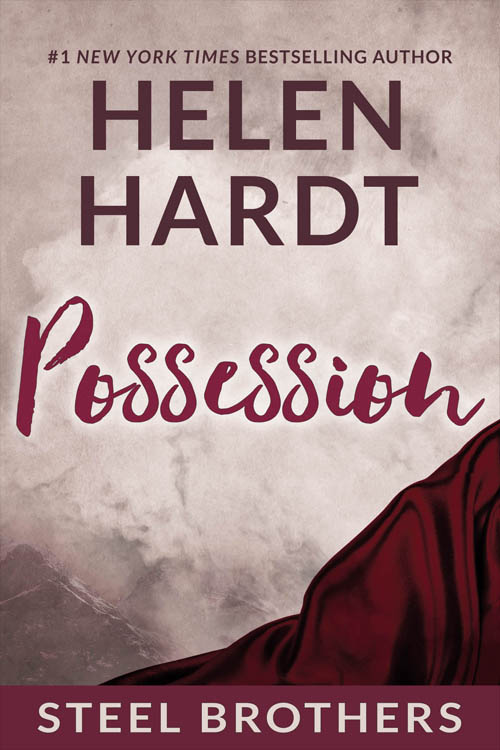 Possession
Jade Roberts’s love for Talon Steel is the real deal, and she’s more determined than ever to help him come to grips with whatever is haunting him. To that end, she continues her investigation of the Steels…and unknowingly attracts some dangerous foes from their shrouded history.

Talon loves Jade deeply and longs to possess her forever, so he faces his worst fears and exposes his rawest wounds in an attempt to heal. The road is icy and treacherous, but if he perseveres and comes out whole on the other side, he’ll finally be worthy of Jade’s love.

The untamed passion between the two still blazes, but as the horrors of Talon’s past resurface, Jade and Talon aren’t safe…

"Possession brings Talon Steel's story to a conclusion, wrapping up a thrilling mystery intertwined with some amazingly hot sex scenes... the buildup to the protagonists discovery keeps the pages moving at a rapid-fire pace. "
-RT Book Reviews
"I'm dead from the strongest book hangover ever. Helen exceeded every expectation I had for this book. It was heart pounding, heartbreaking, intense, full throttle genius. "
-Tina at Bookalicious Babes Blog
"WOAH. Helen Hardt has truly blown me away with this series. It is dark, emotional, intense, horrifying, and utterly beautiful all mixed together. "
-Pretty Little Book Reviews
"Such a beautiful torment - the waiting, the anticipation, the relief that only comes briefly before more questions arise, and the wait begins again... Check. Mate. Ms. Hardt..."
-Bare Naked Words
"The love scenes are beautifully written and so scorching hot I’m fanning my face just thinking about them."
-The Book Sirens

“Did Marj say something to you?”

“No. But she’s keeping something from me.”

“I’m sure she’s not keeping anything from you.” He dropped his gaze to his feet, went to the refrigerator, and poured himself a glass of iced tea. “You want something?”

“A glass of that tea would be great.”

He poured me a glass. “So what do you want to talk about?”

I cleared my throat. “Steve Dugan asked me out today.”

Talon’s eyebrows shot up. “He what?”

“Simmer down. I told him no. In fact, I told him I had just gotten out of a long relationship and I wasn’t ready to date. But the fact of the matter is, I wanted to tell him about us. I just wasn’t sure I could. Can we…make our relationship public?”

“That’s what you want to talk about?”

“Yeah. What did you think I might want to talk about?”

He sighed. “Me leaving you in Grand Junction the other night. Not meeting your dad.”

I cracked a smile. “Well, yeah, that’s on my list as well. And it’s another one of the reasons why I wasn’t sure I could make our relationship public with Steve. I mean, if you say you’re not ready to meet my dad, what does that mean exactly?”

Talon sat down at the table and gestured for me to do the same. “Blue eyes, you may not believe this, but I have never met a woman’s dad in my life.”

“I’m sure you’ve met a lot of dads, Talon, and some of them probably had daughters.”

He shook his head. “You know what I mean.”

“I’ve never had a girlfriend.”

I froze, silent. Beads of condensation emerged on my glass of iced tea. I didn’t know why I was surprised. He’d told me at the beginning that he used women, took what they offered and then went on. It would make sense he’d never had a relationship before.

“Well, my dad is really easygoing. He’ll be great as a first dad.” And hopefully as a last dad too. I didn’t want to think of Talon meeting any other girlfriends’ dads ever. I wanted to be his one and only girlfriend for the rest of his life. But it was way too soon to voice those thoughts.

“I have so much to work out, blue eyes.”

He closed his eyes. “I don’t want you going out with Steve Dugan.”

“Talon, I don’t want to go out with Steve Dugan. But I need to know that you and I are moving forward. That we’re in a real relationship. That what we have means something to you.”

He opened his dark eyes. “How could you think it doesn’t mean something to me? I told you I loved you, for God’s sake. I’ve never said that before.”

He took a sip of iced tea, seemingly lost in thought. He closed his eyes again. “Jade, I want a relationship with you more than I’ve ever wanted anything. I’ve told you this before. You’re the only thing I’ve ever wanted.”

“You have me, Talon. So why do I feel like I can’t tell people about us?”

“This is difficult for me. I’ve never…”

“You’ve never what? Been in a relationship? You’ve made that clear. What’s the big deal here?”

He sighed and took another sip of his drink. “I’ve got so many things to work out, Jade. I don’t know if I’m ready to go public with a relationship yet.”

“Then what am I supposed to tell Steve Dugan or the next guy who asks me out? And Talon, men will ask me out.” I added that last part for Talon’s benefit. Frankly, I’d never been nearly as popular with the guys as someone as gorgeous as Marj was, but it wouldn’t hurt Talon to think I was.

“I don’t want men asking you out.”

“How exactly are you going to stop them? This is a small town, and I’m new blood. If you’re not willing to admit that you’re in a relationship with me and men don’t know that I’m taken, how do you expect to keep them from asking me out?”

“You can just say no. Tell them what you told Dugan. That you just got out of a long relationship and are taking it easy. That’s even partially true.”

“Or”—I braced myself—“I could just go out with the guys who ask me out.”

His face reddened. “What?”

“You heard me. Steve Dugan is a good-looking man. He seemed pretty nice and straightforward. What would be the harm in having a drink with him?”

He stood and grabbed my shoulders, yanking me out of my chair. “You will not have a drink with Steve Dugan or any other man, here or anywhere.”

“Are you forbidding me? Just like you forbade me to get a tattoo?”