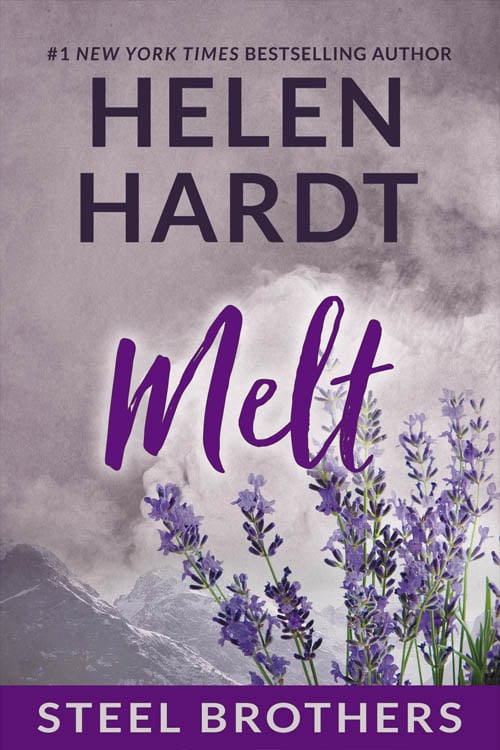 Melt
"The chemistry in Melt is explosive!" - RT Book Reviews

Jonah Steel is intelligent, rich, and hard-working. As the oldest of his siblings, he was charged by his father to protect them.

He failed in the worst way.

Dr. Melanie Carmichael has her own baggage. Although the renowned therapist was able to help Jonah’s brother, she is struggling with feelings of inadequacy. When the oldest Steel walks into her office seeking solace, she can’t turn her back.

As Melanie and Jonah attempt to work through their issues together, desperately trying to ignore the desire brewing between them, ghosts from both their pasts surface…and danger draws near.

"Melt has earned a solid place at the top of my MUST-READ list! "
-Angel Payne, USA Today bestselling author
"Just when you have one question answered more are brought to life keeping you one the edge of your seat page after page."
-Wicked Babes Blog
"Helen has given us a series with men that will not only Melt your heart, they will heat up your soul."
-The Book Fairy Reviews
"Ms. Hardt has continued to weave her web in this installment, and the results are every bit as good…or perhaps better…than what we have seen so far. With every answer, there is another question. "
-Bare Naked Words
"Melt. That is definitely a proper name for this book. Not only did I melt many times while reading it, I also went up in flames."
-Tina at Bookalicious Babes Blog

“What is it, Tal?” I walked into the kitchen of the main ranch house, where Talon, his girlfriend, Jade, and our sister, Marjorie, were sitting at the kitchen table. Our younger brother, Ryan, was also there.

Talon raked his fingers through his dark hair. Dark circles rimmed his eyes. He looked like he hadn’t slept in weeks.

Ryan always had Talon’s back. The two of them were close in a way I would never be close to my brothers. I had always been the oldest, the one doling out dictatorial commands when they wanted to play. And then of course there was the fact that Talon had protected Ryan the day of his abduction—a courtesy I had been unable to extend to Talon as his older brother.

I spent a lot of time thinking about that, thinking I was a piece of shit.

I nodded. “Don’t get up. I’ll get it.” I helped myself to a mug, filled it, and sat down at the table with the other four. “What’s going on?”

Talon paced around the table, clearly agitated. “Someone’s been in our house. This house.”

I raised my eyebrows. “What are you talking about?”

Frigid fingers trailed up my spine. “Would somebody please tell me what the fuck this is about?”

Talon looked at Jade. “You guys are well aware what happened between Jade and me a while back. When I asked her to leave the house.” He winced.

He rubbed his hands together. “Evidently, sometime while Jade was in the shower, someone got into the house.”

“Again, please explain what you’re talking about.” My nerves were on edge, and I was growing impatient.

Jade cleared her throat. “After I came out of the shower, I found this on my pillow.” She opened up what appeared to be a law dictionary and pulled out a flattened red rose. “I never mentioned it because I thought Talon had left it.”

Marj piped in then. “Yeah, Jade told me about the rose. I thought it was kind of weird at first, because we don’t grow roses here on the ranch. But maybe Talon had gone into town and gotten it for her. I didn’t know.”

“Neither of us thought anything about it at the time,” Jade said.

Talon cleared his throat. “Then, just this morning, Jade mentioned it—that I had left a red rose on her pillow. But…I never left her a rose.”