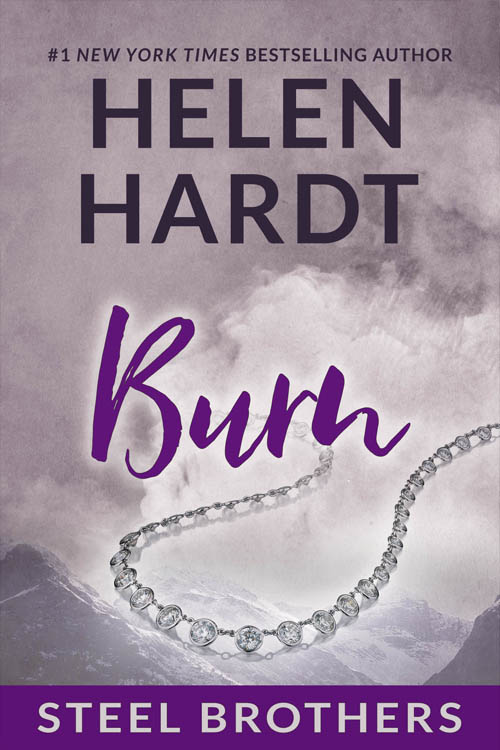 Burn
Jonah Steel is knee deep into trying to solve the mystery surrounding his family and his brother’s abduction, and the arrival of his best friend has complicated the situation…although not as much as his infatuation with his brother’s therapist, Dr. Melanie Carmichael. The quiet humility of the blond beauty has him enthralled, and he burns for her as he never has for any woman.

Melanie Carmichael is intelligent and driven, yet filled with regret. She has fallen in love with gorgeous Jonah Steel, but fears she may never be able to tell him. The demons from her past have come for her…and she may not get out alive.

"Made my heart stop in my chest. Helen has given us such a heartbreakingly beautiful series."
-Tina at Bookalicious Babes Blog
"Each book unfolds leaving readers feeling immensely satisfied."
-Pretty Little Books Blog
"Helen outdid herself with Burn."
-My Girlfriend's Couch Blog
"Man, oh man, Helen Hardt's talent astounds me!!! "
-Wicked Babes Blog Reviews
"I was so hooked right from the start. I can't wait to read the next one."
-Amazeballs Book Addicts
"More mystery and answers, more Steel Brothers and more danger. Sign me up!!!"
-Lustful Literature

“So who lives here anyway?”

I pulled up into a parking space near Melanie’s building. All I had told Bryce so far was that I needed to check on a friend.

God, she was so much more than my friend, and I had been ready to turn her away. But no more. I’d changed my mind. I was going to be there for her, or at least I would try. My own head was such a mess I wasn’t sure I was much good to her, but surely just being there would help.

I didn’t want to lie to Bryce. I was already keeping so much from him. “My friend is…a psychotherapist. Dr. Melanie Carmichael.”

I shook my head with a chuckle. How in the hell had Bryce and I been separated for so long yet he still knew what I was thinking? “That’s none of your concern.”

Bryce gave me a broad grin. “Joe, I have known you your whole damned life. You can’t hide that shit from me. I can read you like a book.”

Apparently, he could, which wasn’t necessarily a good thing. I didn’t want him guessing what I suspected about his father, not until I had better proof. Once I did, I had to tell Bryce before I could tell Talon. I owed Bryce that much. This was his father, after all. I wasn’t looking forward to it.

“Okay,” I said. “You got me. We’ve fooled around a few times, but we’re really just friends.”

“Yeah? Then why are we coming here to check on her? Why not give her a call?”

“Because she’s not answering my calls.”